When I first visited in the 1950’s, ‘MIA” as it is now it was simply Ringway airport where we lads sat on the grass writing down the registrations only a stones throw from the aircraft.

Only the posh kids possessed cameras, I certainly didn’t. The ladies in the nearby cafe kept us going with cups of tea and bottles of pop.

There are still some old timers (other than me) ‘lurking’ in the background,

A British Aerospace (BAe) RJX 100. An advanced version of the ‘BAe’ 146 series of airliners that for whatever reason ‘BAe’ terminated production of in 2001. Three aircraft had been built against orders for 14 from ‘British Airways’ and ‘Drukair’. The aircraft was flown to ‘MIA’ in 2003 for preservation.

Personally, I thought that an aircraft of its size using 4 engines was a problem to operators. I was always surprised that it was not re-engined with 2 engines much as the Handley Page Herald had been in the 1950’s. 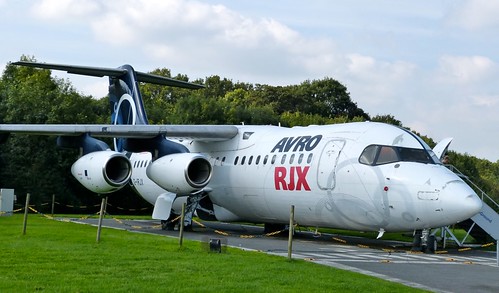 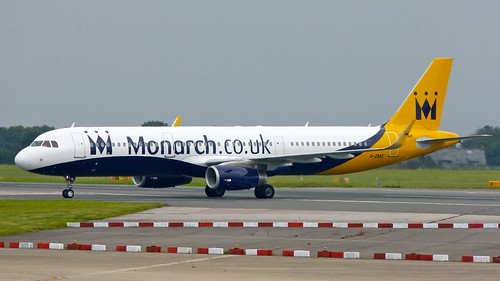 An Embraer 170/175 of ‘flybe’ which first flew for the airline in July 2011 with the test registration of PT-TOB. Surprisingly perhaps, it was not delivered to ‘flybe until the following December (11th). The length of time elapsed between the first flight could be because of the aircraft being used for test purposes during the certification process

In my view one of the most visually attractive airliners I have ever seen it is a tragedy is that we as a nation should be importing these aircraft from Brazil.

If the Brazilians can do it and they do do it very well then this is the type of aircraft that should be being built by the British aircraft industry. 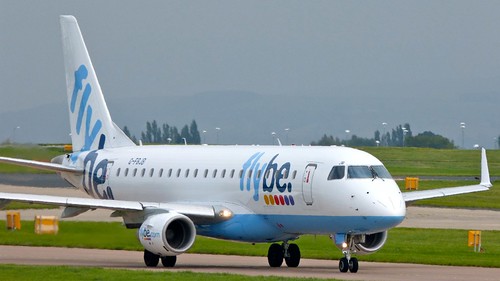 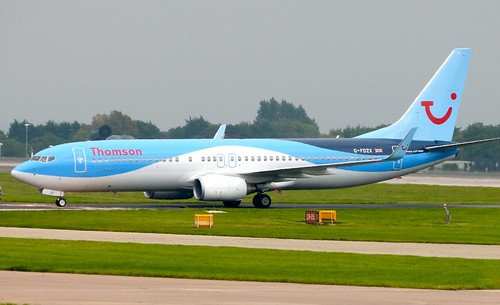 A Dornier 328-110 registered to ‘flybe’ but is operated by ‘Loganair’. It previously operated with the registration D-CDAE. 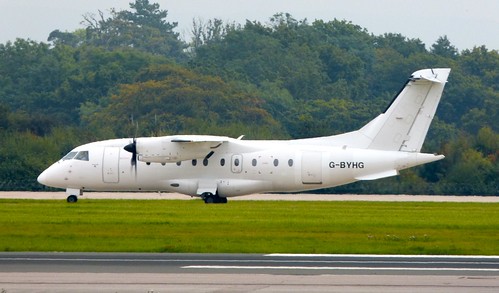 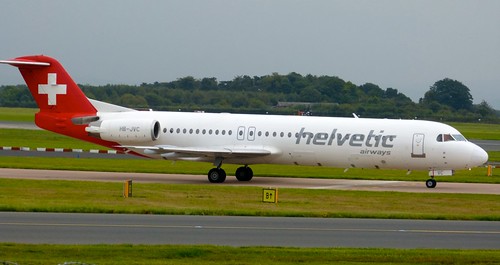 A Learjet 40 built in 2004 registered to ‘Florida Express Corporation’. It was previously registered N502JM.

The Americans use a registration more than once providing that the earlier user is no longer current on the American civil register.

This is N700KG’s third outing having previously been carried by a BAe HS 125-700A and a Piper P-60 Aerostar both of which were eventually sold abroad. 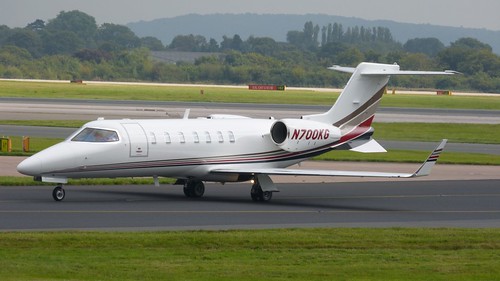 After a period in store following the demise of ‘NA’, it became G-OOBG with ‘First Choice Airways’ (FCA). During its time with ‘FCA’ between 2004 and 2008 it was regularly leased to SkyService as C-FUBG. This was to allow the Canadian operator use of the aircraft when British operations were quieter. ‘FCA’ were merged with Thomson in 2007. 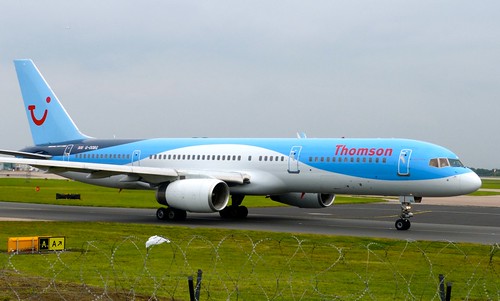 A Bombardier Dash 8 of ‘flybe’. It was delivered new to the airline in July 2009. 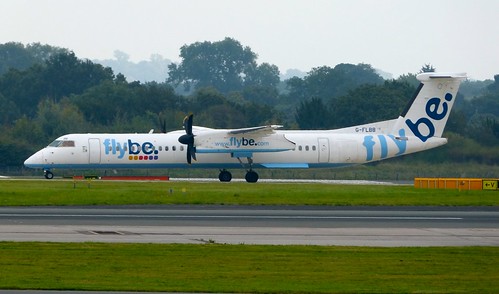 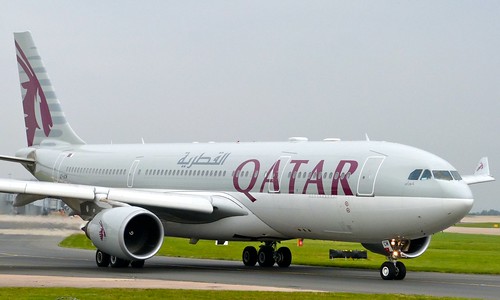 A Boeing 757-27B which first flew in February 1988 as PH-AHE for ‘Air Holland’ to whom it was delivered the following Month. It was leased twice to ‘Sterling Airways’ as OY-SHE in 1989 and1990. Further leases to ‘Icelandair’, ‘Dinar Lineas Aereas’ and ‘Spanair’ followed under its Dutch registration until eventually going to ‘Air Slovakia’ as OM-SNA in 2004.

It came to Jet2 in September 2006 and carries the name’ Newcastle’. 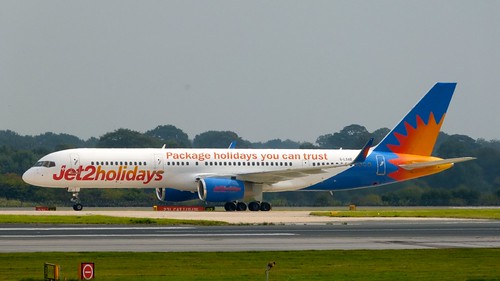 An Airbus A320-214 which first flew in June 2005 as EI-DEO for ‘Aer Lingus’ and was delivered the following month.

From March 2013 it has been leased in full ‘Virgin Atlantic’ (VA) livery. One of four all leased from the same source to operate ‘VA’s domestic ‘Little Red’ flight’s between Heathrow, Aberdeen, Edinburgh and Manchester. The airline has recently announced that these services will be withdrawn at the end of September 2015. 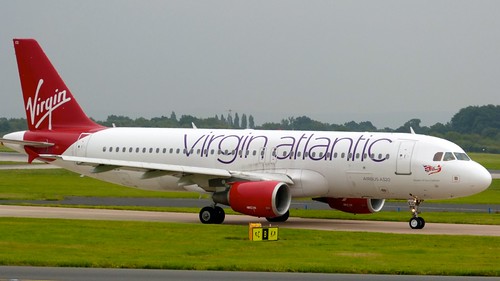 A Boeing 777-3FXER of ‘Etihad Airways’. It first flew in January 2012 being delivered new to the airline on the 17th. of February the same year. 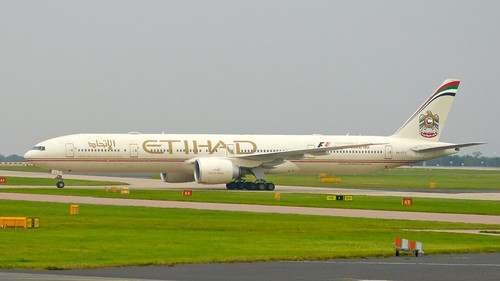 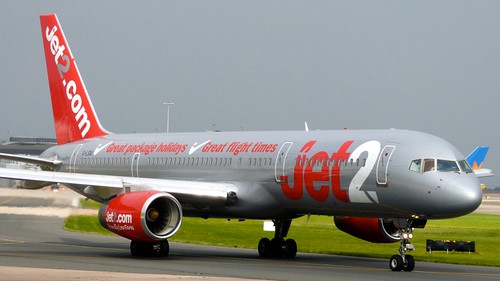 An Airbus A330-243 of ‘Thomas Cook UK’. First flown in June 1999 with the test registration of F-WWKG. Delivered 20 days later to ‘Airtours’ (At) as G-MDBD. It had a spell with ‘Garuda Indonesian Airlines’ in 2001 before returning to ‘At’. They became

‘My Travel Airways’ who eventually became part of the ‘Thomas Cook’ organisation in 2007. 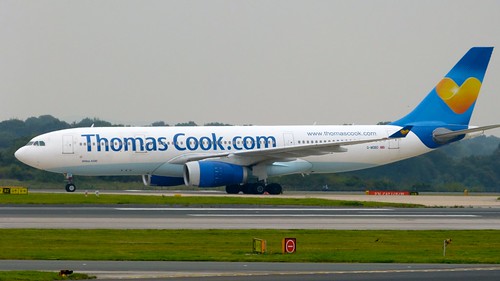