This small City by comparison to some others, Lichfield is located in Staffordshire on the edge of the West Midlands, not far away from the East Midlands and is dominated by its Cathedral.

Lichfield sees to be a quiet place but as it lies along the route of the proposed HS2 railway line, It will no doubt see expansion when it becomes commutable from London.

The Bus Station is old fashioned being reminiscent of the 1960’s and ripe for development. That is not to say that it is not functional. The buses are driven in and driven out. No drive in and reverse out. The shelters are quite effective at keeping the rain out as I found out for myself !

Most of the services operating out of the bus station are in the hands of ‘Arriva’ but there are others.

The ‘Arriva’ fleet is represented by

An Optare Versa from ‘Arriva Midlands’ about to depart for its home town at Burton on Trent. 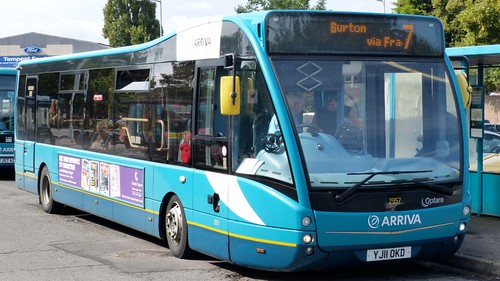 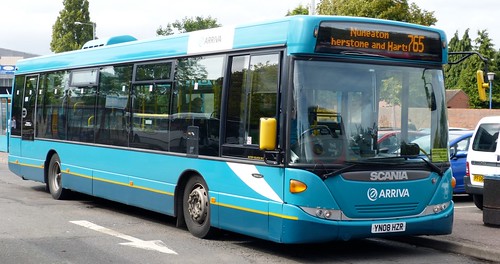 Another of the same from the same batch albeit wearing the earlier livery. 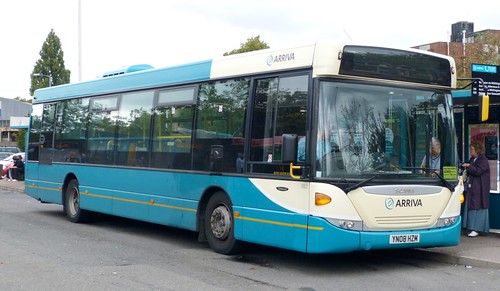 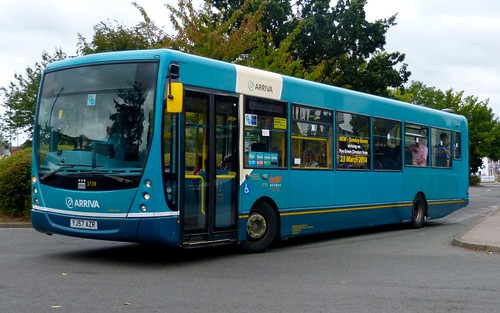 Old and new ‘midi buses’ were in attendance. 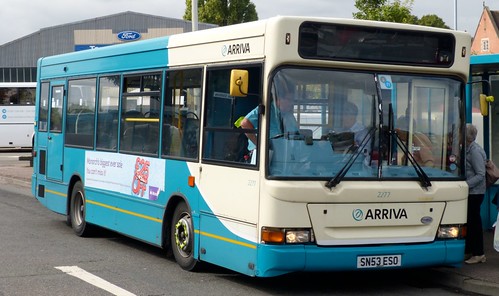 An Alexander Dennis Ltd. Enviro 200 branded for the Walsall-Lichfield service 35.

The attractive young lady driving this bus had a smile that was like the sun coming out. She quite made my day! 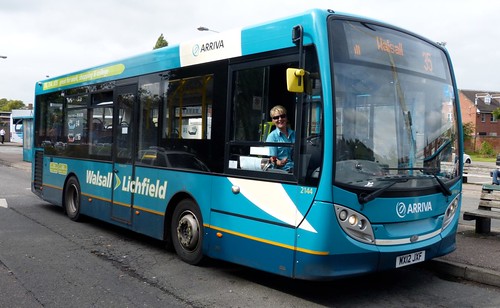 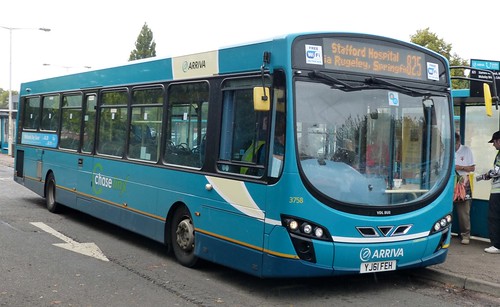 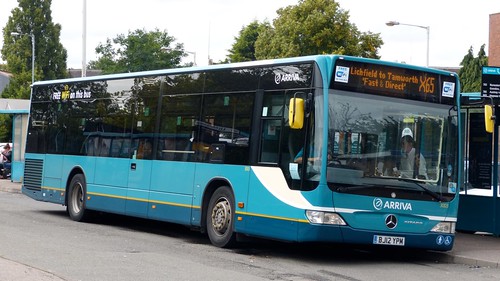 The X65 was was introduced to compete with CEN Group owned Central Buses who operate a fleet of approximately 24 buses across the West Midlands.

They run the service between Lichfield and Tamworth as the X55 and cleverly include the ‘55’ in its ‘xpress’ branding.

An Alexander Dennis Enviro SLF 200. One of 2 in the fleet. (the other being ZXK). 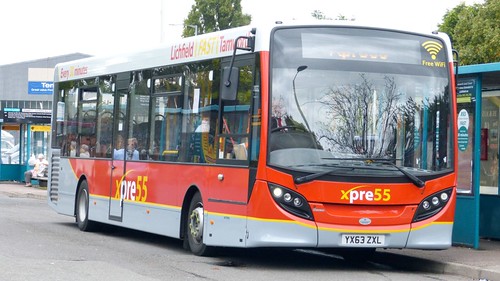 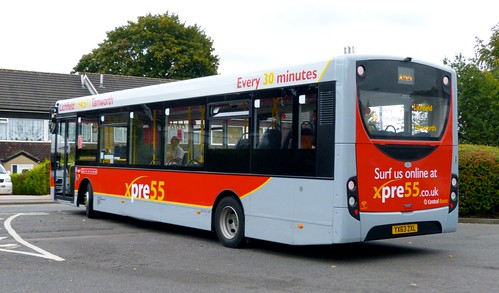 ‘Midland Classic’ are a relatively new operator mainly working in the Burton-on-Trent area. They operate the X12 from Burton to Lichfield on a half hourly basis and hourly it is extended to Sutton Coldfield.

A Scania L94UB with Wright Pulsar bodywork. One of 5 similar that came from  ‘South Lancs Transport’ of Atherton in Greater Manchester. 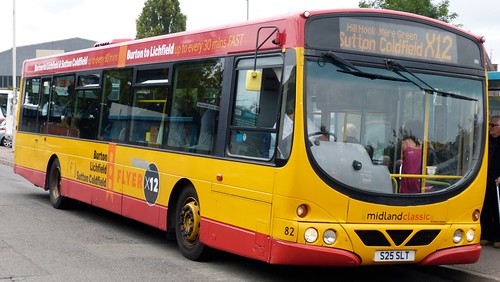 It is unusual for a Ford Transit to appear on bus work but this one working for ‘Solus Coaches’ is operating on service No. 823 between Lichfield and Rugeley. 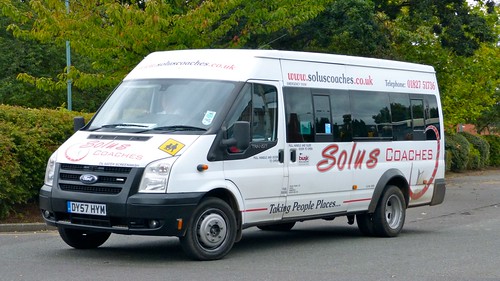 An Optare Solo of ‘Blue Diamond’ (BD). There are a couple of these working a circular service round North Lichfield. The other is BUF. Both came from ‘Rossendale Transport’.

‘BD’ started with the formation of the Birmingham Coach Company in 1984 and today after a complex series of take overs is now part of the ‘Rotala’ group. 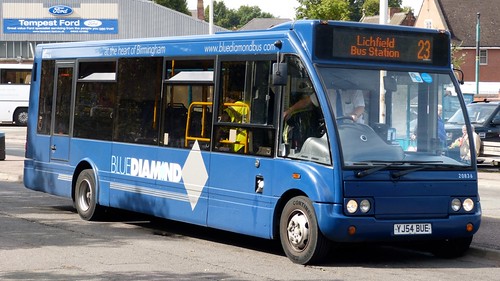 A Volvo B10M with Plaxton bodywork. A now elderly coach which looked very well. Working for ‘Chris Cars’ who use the fleet name ‘Coracle Coaches’, based in Carmarthen in South Wales. 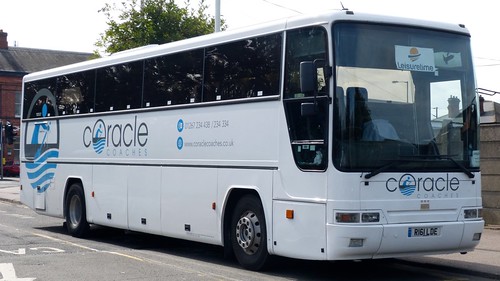 A Plaxton Cheetah bodied Mercedes-Benz-Vario working for ‘Sleafordian’ from Sleaford in Lincolnshire who this year celebrate 50 years in the coaching business. Congratulations !!

(Somebody has pinched the 3 pointed M-B 'star' off the radiator).

A Volvo B9R with Plaxton Elite bodywork. Working for ‘National Express’ contractor ‘Park’s of Hamilton’ and just leaving Lichfield on on its way to Brixham.

The driver very kindly stopped and posed the coach for me. 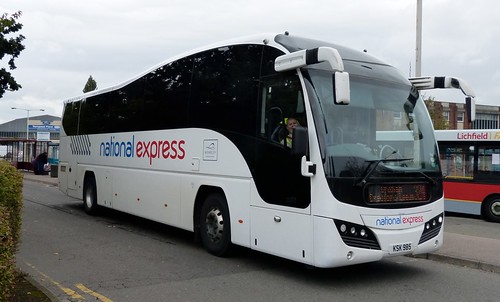 A Volvo B10B with Northern Counties Paladin bodywork employed by ‘Arriva’ on driver training duties called in to sample the bus station’s facilities. 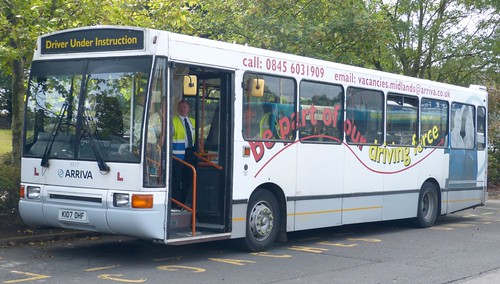