They of course are the major collections but there are many other private museums probably the best of which is at Newark in Nottinghamshire.

I have visited all of them at various times but its 4 years or so since I visited Cosford so it was a long overdue return.

Most of the exhibits are indoors but two major transports live outside.

Built by Lockheed at Marietta in Georgia USA. One of a batch of Hercules numbering 66 that were delivered to the RAF between 1966 and 1968.

In the early 1980’s it was one of 30 aircraft that were converted to C Mk.3 configuration by Marshalls of Cambridge. This involved inserting a fuselage plug 15 feet in length.

It spent its early years in the Far East before coming home in1971 to become part of the Lyneham Transport Wing. 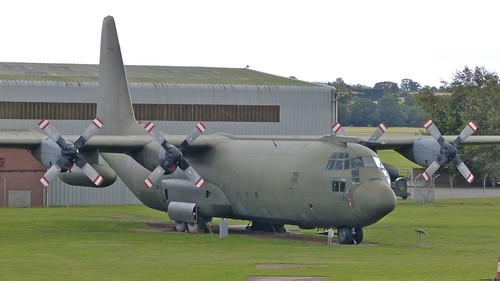 The original XM 497 was a Bristol Britannia C.1 which first flew in August 1960 and was delivered to the RAF in December of the same year. On withdrawal it was to have become OO-YCF on the Belgian Civil Register but this was not taken up and the aircraft passed to the Fire School at Stansted where it perished in 1981.

The current XM 497 was built in 1957 for ‘British Overseas Airways Corporation’ (BOAC) registered G-AOVF. It has never served with the RAF but for display purposes it has been painted to represent an aircraft that did.

It was converted to a freighter in 1964 and leased to ‘British Eagle’. It spent the rest of its working life with various airlines including. ‘Monarch’ and ‘Donaldson International Airways’before being retired to Cosford in May 1984. 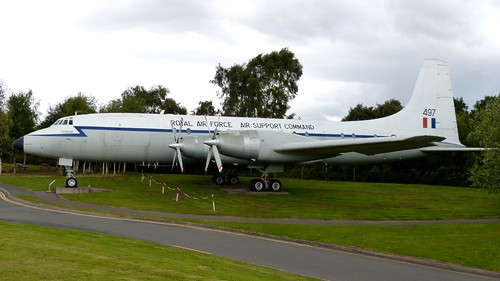 Developed from the civilian Dove, one of 30 supplied to the RAF from 1947. It eventually served with 207 Communications Squadron based at RAF Northolt from where it was reduced to being a maintenance airframe serial 8820M. It regained its service serial for display purposes. 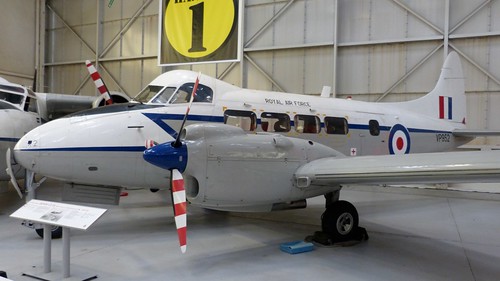 Delivered to the RAF in June 1955. Formerly a VIP configured aircraft when it served as the C in C of RAF Air Support Command’s personal aircraft.  It then went on to work for No 60 Squadron at RAF Wildenrath in Germany. 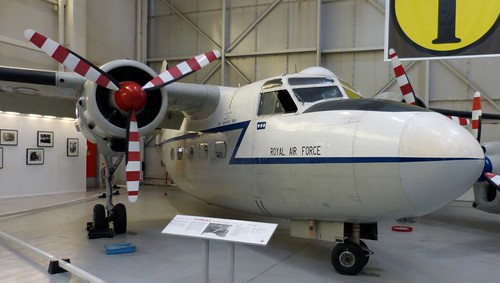 One of 7 CC 2’s produced. It was the military equivalent of the civilian Series 3 which were powered by the uprated Alvis Leonides 531 engines. 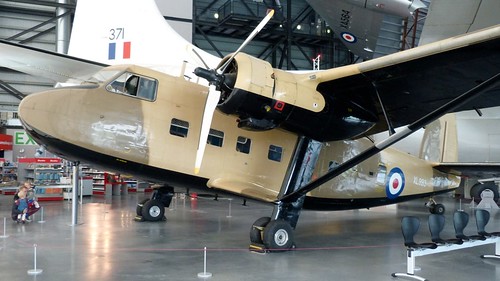 This Rolls Royce Dart powered freighter was developed from the civil ‘AW’ 650. The major difference being that while the civil machine could be loaded from the front and rear, the military version had the nose loading facility sealed and was modified to carry the bulbous weather radome. A stronger floor and clamshell rear doors also featured. It was also equipped for para dropping.

New in 1962 it was initially issued to 105 Squadron in Aden. It later served with 114 and 267 Squadrons before being retired in 1975. It was used as a ground instructional airframe at RAF Cosford before being transferred to the Museum where it wears the livery of Training Command. 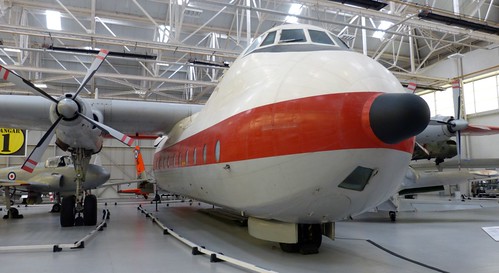 Another Rolls Royce powered freighter (this time the Tyne). Only 10 of these heavy lift transports were built. Entering service in 1966, the Belfast fleet barely lasted 10 years. Some were sold on for use in the civil market.

XR 371 was the last Belfast built and after service with 53 Squadron at Brize Norton it was retired to Cosford in 1978. 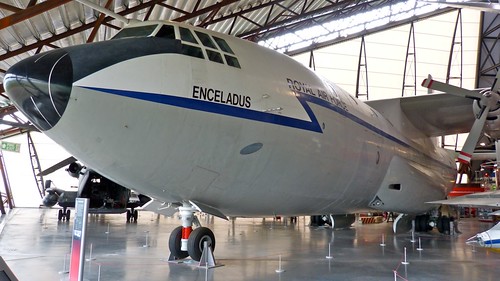 The York was the wing, engines,wheels and tailplane of the Avro Lancaster married to a new square section fuselage that did service both as a freighter and an airliner in the postwar period. The war ended before this aircraft was delivered to the RAF so it became  G-AGNV with first of all ‘British Overseas Airways Corporation and then ‘Skyways’.

Many Yorks flew on the Berlin Airlift delivering coal amongst other things. One interesting feature of this aircraft is that the cabin windows are painted onto the sides of the fuselage. 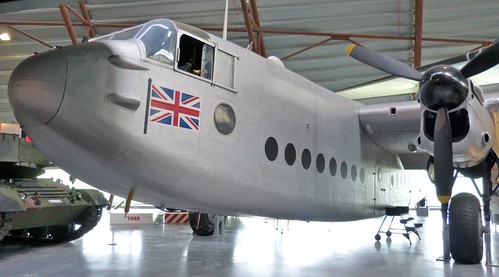 Formerly 44-77033 in American service. From 1945 it became General Montgomery’s (Monty) personal transport. To enable it to fulfill that role it was fitted out as a VIP aircraft complete with kitchen, armchair, settees and even a cocktail cabinet...!

It continued to lead a VIP ‘life’ being allocated to the British Military Governors in Germany. Serving eventually on the Royal Flight, the aircraft being used during a visit the Queen made to Nepal.

By 1970, it was the last Dakota with the RAF and was retired to RAF Northolt for preservation. Originally painted in ‘D-Day’ markings it was given its present colour scheme in 2005.

I used to hang my completed Airfix kits from my bedroom ceiling as a lad. I never thought that I would see it done with the real thing....! 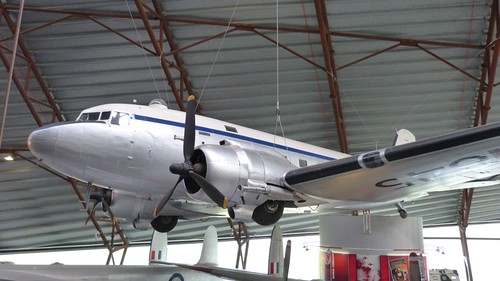 Developed from a 1930’s vintage Coastal Command patrol and attack aircraft the Anson  was developed through a trainer version to the transport seen here. Continuing in production until 1947, the last of their kind with the RAF were withdrawn in June 1968.

TX 214 was built at Yeadon (Leeds) it served with various communications flights and squadrons including the RAF Staff College flight, HQ Reserve Command an Metropolitan Communications. withdrawn in 1963 to Storage at RAF Henlow, it came to Cosford in December 1978. 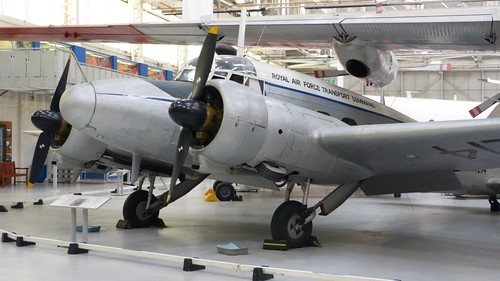 Powered by 4 Bristol Hercules engines, the Hastings was intended to replace the

Built in March 1948, as a C.1 the thirteenth of an order for 100, the aircraft served on operations such as the Berlin Airlift with various squadrons including No’s 47 and 99

In 1950 it was modified by ‘HP’ to  Met. 1 standard for use as a weather reconnaissance aircraft with 202 Squadron  in Coastal Command.

In 1959 it was further modified by ‘HP’ as a T.5 for use by the Bomber Command Bombing School (BCBS) for use in training navigators and bomb aimers for the ‘V’ bomber force.

I first new the aircraft in the 1970’s when it was based at RAF Lindholme near Doncaster by which time the ‘BCBS’ had become the Strike Command Bombing School.

It was withdrawn in 1977 and arrived at RAF Cosford in August of that year. 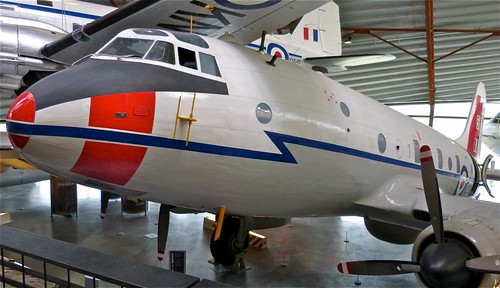 Posted by Dennis Basford's Rails, Roads and Runways at 17:37