I don’t think that I have ever before built a blog around one single image so this has to be exceptional and it is.

(Whoever picked this registration had either a sense of humour or a sense of the ridiculous).

It is a Scania gas bus demonstrator with an Alexander Dennis Ltd Enviro 300 body that is working for the ‘Bath Bus Company’ who are a subsidiary of the French owned RATP group.

Nothing unusual about a gas bus. Reading has them, Stagecoach in Sunderland has them.

What is unusual is the source of the gas. In this case it comes from food and human waste and it is the latter that has lead to it being christened the ‘POO’ bus.

The vinyl’s on the nearside feature the same ‘people’ but whereas the ‘offsiders’ are scraping plates, the nearsiders are sitting on the toilet.

Employed for a trial period of 4 weeks between Bath and Bristol Airport the bus can travel 300 km on one filling of gas.

This I believe is the amount of ‘fuel’ that 5 people will generate over a year.

I spoke to the driver who said that it is very quiet and easy to drive.

I saw it move off and as far as I could tell there were no ‘noxious’ fumes being issued. 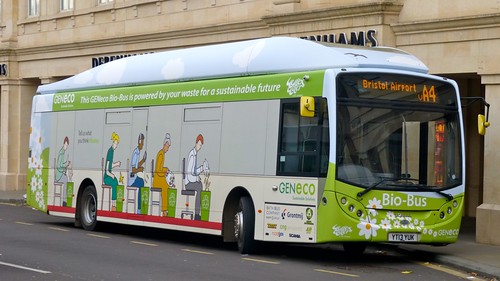 What the really country needs at the moment is a bus that will run on hot air.

In the run up to the next General Election, a re-fuelling point at the Houses of Parliament would provide enough fuel to power the entire fleet of buses in London...!

Posted by Dennis Basford's Rails, Roads and Runways at 10:18